Triplets and Breach Births and the Glory of Unexpected Outcomes

A story about birth and how the things we want, plan for, yearn for – don’t always show up as planned. And – how wonderful that can be. I was able to experience this with a literal birth experience here on the farm where I share my life with one man, 2 cats, 3 dogs, and a variety of birds, sheep and goats. 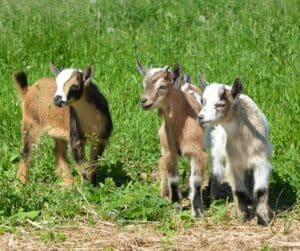 Rosie , one of our goat does, had been in labor much of the day. Actually, for a couple of weeks she had been making little “meep” sounds, grunting as, I guessed, the babies she carried were moving into position for delivery.

Around 5:30 PM she started pushing. I saw the water sack protrude and then…Go Back In.

Something different. And completely unexpected.

By 8 PM we were pretty sure something was Not Right and I was madly searching the internet for assistance. Calling a vet was pointless as we live so far out in the woods that no on could reach us in time to make a difference. A phone call to friends who also raise goats? Went to voice mail.

Gerald and I were on our own.

We really didn’t want to lose her.

And – we had no idea of What To Do. Conceptually? Yes. But….

At this point we were standing in the chasm between concept and the grounded confidence that only comes from experience.

At 8:30 PM Rosie’s exhaustion was evident. She’d been pushing for 3 hours by then with no result.

The Internet said: Anything beyond 30 minutes of pushing is cause for concern.

So we gloved up, grabbed some lubricant and Went In.

Gerald’s hand was too big, so I took a turn.

I should note: this goat pelvic exam was a first for both Rosie and me, and neither of us particularly enjoyed it. She was bellowing by now, and still pushing really hard, to no avail. I was terrified of doing damage.

What I encountered In There? Clearly was not a baby goat head. Felt like a rump, which confirmed our fears this was a breach.

Unable to get past her pelvic rim to reach baby’s legs, I yielded the field back to Gerald. This time around, he was able to access the baby’s legs and one by one, pull them up over the pelvic rim. I stood and held Rosie’s head, trying to soothe a very upset goat while I was almost as frantic as she.

At this point, we knew we might have to sacrifice a baby in order to save a mama.

Timing his pulls with Rosie’s pushes, Gerald was able to pull the baby, a little buck, out in the next three pushes. Rosie immediately began cleaning the baby, and Gerald cleared the mucus from his face. Towels were at the ready to assist in drying baby as soon as mama Rosie had a chance to bond.

Did I mention it was unseasonably cold? And that hypothermia is one of the main killers of newborn goats? They are born with so little body fat, they are all skin and bones.

A heat lamp was quickly rigged and turned on.

About twenty minutes later, Rosie hunched over and began pushing again. We saw another goat bottom appear and opted to see if Rosie could deliver on her own. Baby Number Two emerged after 4-5 good pushes, even though it, too, was a breach.

Cleaning and drying of Number Two commenced as Number One began to struggle to stand for the first time.

Ordinarily, you would think the story ends here, Two babies, both breach, born after hours of hard labor. Twins are common among our goats. An expected outcome.

Within a scant few minutes of Number Two’s touch-down, Rosie hunched again. We figured: afterbirth. A little soon, but given how long everything else had taken, perhaps Rosie’s body was just ready to Be Done With It.

I realized what was emerging looked more substantial than afterbirth. As I opened my mouth to say, “Holy Moly, there’s a third one coming!” Rosie gave one big push and a small body flew out of her and landed with a resounding smack.

Again: it Flew Out of her. A projectile birth.

Did not know that was possible.

Number Three? A little slimy body, lying partly on its back, twisted with front legs going one way and hind legs the other. It did not move.

I did not see how could anything survive, first the hours of contractions and then the really hard landing, and steeled myself to deal with a dead or dying newborn.

But the story had happy, if very unexpected ending.

All three babies thrived. Yes, Number Two spent the night curled up in bed with me, due to birth-trauma hypothermia, but returned to Mama Rosie the next morning after gaining the ability to maintain his core temp. In spite of the difficult arrivals and any birth-related trauma, 24 hours after that dramatic entry, all three babies and mama were doing well.

Lest you think the number and the manner of arrival were all that was unexpected about that night….After the three babies were born, Gerald and I sat on a hay bale just outside Rosie’s stall and watched mama encourage her babies to nurse.

What was most unexpected, what really surprised me was how exhilarated I was. We both were.

High as kites. Slightly drunk on the elation of new life – and having helped it come into this world.

Heady stuff, that. And so, SO important to remember when you’re in the pushing phase of labor and nothing seems to be happening. Whether it’s the birth of a project, a team, a vision or a new enterprise, gestation may end in ways you can’t foresee. Delivery may take extra pushing AND assistance.

AND (notice that’s a BIG “and”) – you need to be prepared for loss. Willing to let go even after months of gestation and hours of heavy labor. (More on this in a separate article.)

The new life you seek to bring into the world via that project, team, vision? May appear ass-backwards and then, only after some (truly ugly) straining.

And if this happens: DO. NOT. MAKE. YOURSELF. WRONG.

Instead, clean up any birth-mess, swaddle your newborn and lovelovelove it into thriving.

Remember: Unexpected outcomes can be exhilarating even when exhausting, and new life can thrive even when it seems oh, so tenuous at first.

I would wish for you that all your forms of new life have smooth, happy launchings. But that might rob you of the opportunity to look for the unexpected grace. The surprising exhilaration. The sweetness of achievement that just may exceed anything you could have dreamed possible.