[The Challenge Chronicles #10] The Dark Side of Normal 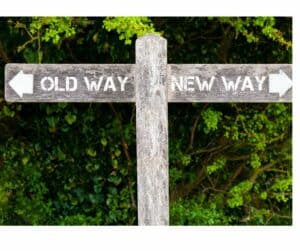 Since the initial pandemic-driven lockdowns in early 2020, we’ve heard the refrain, “….when we get back to normal,” or “when life goes back to normal…”

This raises questions for me, including:

And if I tell the truth, there’s this (possibly subversive)  little voice in the back of my head that asks: What if normal is NOT what we need?

If normal means, “what is known and familiar,” there’s subtext we need to surface. My sense is that this subtext is often:

I want to get back to (my idea) of normal (because I am too uncomfortable with anything else).

I want to get back to (my idea) of normal (because my capacity for meeting what is unfamiliar has been exceeded and I need some relief).

Both are entirely valid ways to feel.

The thoughts and feelings behind that subtext are a collection of powerful, shadowed influences, living below the surface of conscious awareness and leading us to chase what cannot be reacquired, and what likely won’t serve us.

Here’s what I mean:

In the first couple of years after my mama died, I went through a spate of watching old Andy Griffith reruns. My heart yearned for the Mayberry shown on television.

I hankered for that Mayberry experience of being in a small town where everyone still sits on their front porch in the evening, drinking lemonade or iced tea and telling tales. Where neighbors amble down the sidewalk and stop to visit. Where you know the local peace officers and they know you and your family – and it isn’t for the all the wrong reasons. And the most serious conflict in town happens when two members show up at the garden club meeting wearing the same hat, or the barber shop was closed unexpectedly when you wanted a hair cut (or the latest gossip).

In an old interview found online, Andy Griffith said even though the show was produced in the 1960’s, they set out from the beginning to give it a 1930’s look and feel.

This had me ask myself:

Why I would be attracted to – longing for! – some aspect of small-town USA in the 1930s and in particular, a Southern small town from that era.

Even as portrayed by the sweetness of TV’s Mayberry, that era included cultural norms and mandates I don’t want as the backdrop for my life.

For starters, in Mayberry all the female characters wore dresses all the time – All Of The Time – except for the aggressively amorous daughter of the rowdy moonshining hillbilly family.  (So…no hyperbole there…) All of the women occupied support roles instead of professional or leadership roles, except for the pharmacist, and much was made of having a “lady pharmacist.”

Not exactly role models for my life in 2012. (Never mind the lack of diversity in a 1960’s television show aiming for a 1930’s feel in small town Southern US.)(Let’s face it, there’s a whole lot of “pale” going on in Mayberry.)

Given these realizations, I’ve been sitting with the question, “What is it about Mayberry that calls to me?” This reflection has been a decade-long iterative process.

Initially, what surfaced was this: I wanted a sense of community, of connection based in mutual trust and respect, of knowing and being known. And of seeing myself reflected through the eyes of loving people.

All of which is true – and – all of which I have, even if it doesn’t look like Mayberry. So, I kept digging.

Over time, what emerged was this: I realized I wanted a specific kind of comfort and comforting. A sense of safety and reassurance.

I wanted to go back to what was *normal* for my life, growing up in a small Southern town in the 1960’s…where, if I tell the rest of the truth, normal meant a lot of things that were not life-affirming or loving.

Yes, normal did include many positives for me, like  growing up in a “village,” where more than one mama was looking out for you. Normal meant it was harder for me to misbehave because of all the adult eyes paying attention.

It meant friends’ homes within walking distance and neighborhoods full of Boomer children. A time it was safe to trick or treat without adult supervision because the kids moved through the streets in mutually protective herds, secure in how oblivious we were of any need for protection.

In many respects, at least for people who look like me, it was a time of freedom, if only the freedom born of naivete’.

But normal meant other things, too.

Normal meant power in the community was held in the hands of a few people, who all looked more like me than the majority in a town where 80-85% of the population were African American.

Normal meant not being able to ask the black woman who worked in our household what she thought about certain topics of the day, like the Civil Rights movement and all that accompanied it, because to do so would make her vulnerable.

Normal meant growing up in a household where one parent’s unrecognized, unaddressed mental illness fostered a lack of emotional safety.

Normal meant being “a lady” was more important than being happy, and “emotional awareness” was an unformed dream of a distant future. Where exercising personal agency was “being uppity.”

Normal meant allowing men to touch you inappropriately, without permission and without recourse. Normal also meant being polite was far more important than personal boundaries, which were mostly not allowed.

Normal meant women were the keepers of emotion and men weren’t allowed to show feelings, especially feelings of vulnerability.

Normal meant we all thought the plastics industry was the best thing since sliced bread,  and that we’d never run out of fossil fuels. Normal meant no one had heard of climate change, so it didn’t really matter just how much we logged and drilled and dumped.

Based on these indicators, many of which have not changed very much, we still have WAY too much “normal” going on.

The recurring refrain of “getting back to normal,” Does Not Serve Us. I think what we’re saying is, “Let’s go back to a time that we could be more comfortable, even if it means my comfort is contingent upon a lack of awareness or accountability, and has damaging consequences for others.”

Let’s tell the truth that what we want, what we desperately yearn for, is getting out of the exhausting loop of meeting relentless change. We want the comfort of the familiar and the known…because the human brain does not like the uncertainty engendered by what is unfamiliar.

But wanting the norms of yesteryear restored today, for the sake of comfort – especially where “comfort” is defined by a few people in positions of privilege and power, or by those yelling most loudly, does not restore anyone or anything other than the transient relief of illusory power.

What if we shift the conversation to look first – not at “normal,” which is the seductive go-to  –  but instead at “comfort” and “comforting.” At “restorative” and “nurturing.”

And another word coming to mind during the 10 days of public ceremony around the death of Queen Elizabeth II. In the wake of her passing, as I watched my own grief surfacing (to my surprise) and the grief of so many in the world, I heard one word over and over: Constancy.

In a time of turbulence, of unrelenting change, where Life seems to be calling us to adapt and adapt and continue to adapt to the new and unforeseen, the Queen was a constant presence and a presence of constancy. That quality of presence is comforting (there’s that word again) when we’re navigating the unfamiliar.

***Comfort, where comfort means soothing vs. numbing, where we source reassurance and nurturing through self-connection vs. avoidance or distraction. (Including the seductively juicy distraction of scrambling to get back to “normal.”)

***Constancy, where how we are present is conscious, intentional, and based in devoted active practice, where faithfulness is to connection with Self and self-awareness as the foundation for everything. Every. Thing.

I propose a new conversation.

As for the term, “new normal,” it’s a lovely idea but only so long as “new” isn’t simply an updated mask for “Let’s perpetuate the familiar (no matter how damaging it is).”

Life is calling us to break new trails in previously uncharted wilderness.  This means finding new ways to relate to ourselves and each other, and exploring new kinds of conversations that do more than bring us comfort; they help us remain present with discomfort.

You got that, right? This is big:

We need conversations that go beyond offering comfort; they help us remain present WITH discomfort.

It means remaining faithful and constant in building the consciousness, capacities and resilience so desperately needed for us to face the realities of this era in human  history.

In many ways, chasing “normal” is like trying to find a new path while stubbornly clutching an old map, refusing to look at anything other than established trails.

One last thought: If, upon reading this, you experience emotional triggering, if you find yourself wanting to push against these ideas or the messenger, I invite you NOT to go for the “sugar fix” of lashing out (including snarking or being sarcastic). Instead try sitting with the question of what that triggering might be wanting to reveal to you about yourself.

Or, if, upon reading the darker aspects of what was “normal” in my growing up, notice if a part of you wants to offer sympathy for any aspect of my journey (and please don’t), because here’s the point:

What gets stirred in you is about you and for you.

Notice and honor what stirs within you, whatever emotional flavor it may take, for that is Sacred Stuff. This is one way to practice constancy with Self and to self-comfort by remaining compassionately present with yourself, no matter what you are feeling.
In celebration of the  unfolding adventure!

PS: This article on the Dark Side of Normal explores some of the shadow aspects of what we consider “normal,” and the consequences of that old normal. I’m continuing this theme of looking at shadow aspects in key areas, including goal setting, which – as we have known it – has been really damaging for many people. Learn more here.